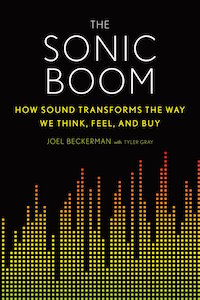 Joel Beckerman’s The Sonic Boom is a great book for anyone who wants to learn how music and sound in general affects what we do. Beckerman is the founder of Man Made Music and produced news music for CBS News and NBC News.

Because we react faster to sound than to all other stimuli, sound is the most efficient way to convey a message. Yet it is often ignored by even the smartest people, argues Beckerman. Much of his book is spent on explaining how you can use it to your benefit.

The book doesn’t go into much detail about Beckerman’s work for CBS News and NBC News. He produced John Williams’ 2004 updates to The Mission, as well as James Horner’s 2006 work for CBS News. As a fan of news theme music, that is of course slightly disappointing. But he does devote a chapter each to his music for Univision and the Superbowl on NBC.

Aside from that, Beckman offers a lot of corporate examples — Apple, AT&T, Mister Softee — that are described vividly. The Sonic Boom is exceptionally well written. You will never listen to sound the same way again.