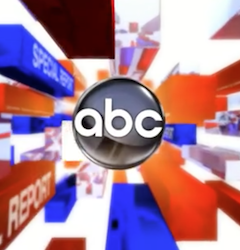 The terrible news out of Boston today marked the debut of a new ABC News special report theme. The previous theme, which had been in use for about two decades, has been retired. DreamArtists Studios composed the new music.

The special report theme is often used for big and unexpected news events. Such was the case today. Shortly after 3 p.m. ET George Stephanopolous anchored a special report on the explosion at the Boston Marathon.

Recently ABC News had debuted new opening graphics for their special reports that match the graphics for World News. However most of the special reports of late were focussed on the election of a new pope and for that ABC used a special theme. So the new theme did not make its debut until today.

UPDATE (April 16, 2013): The new Special Report theme has been added to Network News Music. You can listen to the music right here.